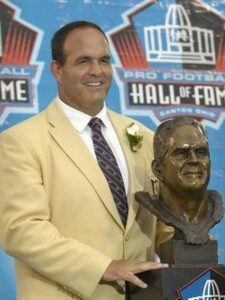 Bruce was the first round pick in 1983 for the Houston Oilers. He was later selected as guard on the NFL’s All-decade team of the 1990s.  Over all, he was in the NFL for 19 seasons with 296 games played, had 9 All-Pro selections with 14 consecutive Pro Bowls, and was inducted into the Pro Football Hall of Fame in 2007. His number 74 jersey is retired by the Tennessee Titans.