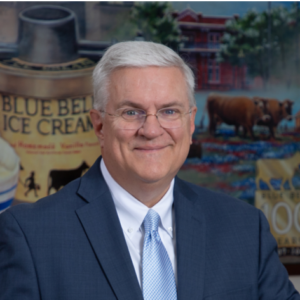 Ricky Dickson currently serves as CEO and president of Blue Bell Creameries but began his career with Blue Bell in 1981. Since then he has served in numerous sales, management and leadership roles within the company. He was promoted to President in 2017 and was elected CEO in 2019.

Ricky has also been deeply involved in the community throughout his career serving with the Chamber of Commerce, the Rotary Club, non-profit organizations to assist the homeless and working poor, as well as his local church.

Rick and his wife Anita have 5 children and 8 grandchildren.