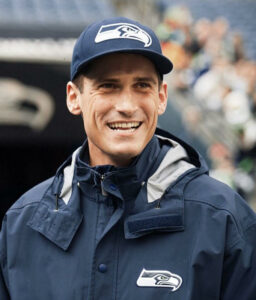 Ben Malcolmson’s amazing story of purpose and impact began when, as a student reporter for the USC Daily Trojan newspaper, he went through walk-on tryouts for the USC football team so he could write about how hard it was from a first-person perspective. Despite USC being the top team in the country and Ben having not played football since he was in the fifth grade, he shockingly made the team.

Ben went on to work for Coach Pete Carroll at USC for three seasons before joining him in Seattle for the next 13.

“Ben has a fascinating and inspiring story to share that has touched my life, my family and my career in ways I could never have imagined.”