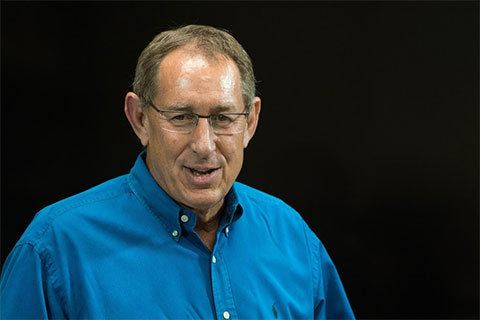 Dwight Edwards was born in El Paso, Texas and is a direct descendent of renowned theologian and pastor, Jonathan Edwards. He has pastored for over thirty years in various capacities. He ministered for 23 years at Grace Bible Church in College Station, TX. From 1980-1990 he served as the college pastor and from 1990-2003 he ministered as the senior pastor of the 2500 member congregation. As well, he has served on the staff of Grace Bible Church in The Heights (Houston), and WoodsEdge Community Church (The Woodlands).

He presently serves as the Senior Pastor of WatersEdge Community Church in Houston, Texas. A former professional tennis player, he has ministered throughout the United States and many places in the world over the last 35 years. He is also widely sought after as a motivational speaker for businesses, schools, athletic teams, and governmental agencies. He has given presentations at Yale, Princeton, The Air Force Academy, Vanderbilt, Rice, Texas A&M University, and many other schools. He is a graduate of The University of Mary Hardin Baylor and attended Dallas Theological Seminary.

In addition, Dwight is a bestselling author. He has written six books prior to Game-Changing Christianity – “Revolution Within”, “Releasing the Rivers Within”, “A Tale of Three Ships”, “Kindling for the Fire”, “Say ‘No’ to Vanilla”, and “High Octane for the Spirit”. He also has a workbook entitled “Experiencing Christ Within” and has written numerous magazine articles. He is a Community Associate for McMurtry College at Rice University.